Yes, songs about kitchens. You will be surprised.

I started thinking about this theme while listening to the Lemonheads song, Stove. You know when you get a new album, you might not study it, but just play it a few times to let it grow on you? That’s what happened with this one. The album is called Lovey, and it’s a bit patchy – not in the same league as It’s A Shame About Ray, but features some great songs.

Gradually I found myself singing an emotional line that started “I know I shouldn’t think about it anymore” and it sounded like the usual post-breakup business. But when I looked up the lyrics (because they’re not very clear when you listen), I found this:

Looking more closely, we learn that the gas man was once a boxer and had a son at UVM (University of Vermont). And they put a new stove in and the old one sits in the corridor, but every time the singer (the peerless Evan Dando) sees it, he gets upset.

All of this is dressed in a scorching fast rhythm that would get me going if it was about, well, a stove.

So, here it is. No video to look at, just a great, quirky rock-pop song.

Kitchen songs in general – and there are a few – are not usually so off-the-wall. There’s the blues classic by Robert Johnson, Come On In My Kitchen, which is a not particularly subtle invitation to join him not in his kitchen, but somewhere else warm and comfortable where he can stir the lady’s passions and probably serve up some special sauce in the end, but it’s all mixed up with somebody else having done him wrong, stolen his girl and he steals her back again. There is a brilliant live version by Steve Miller, revving up a 12-string guitar like you have never heard.

A typical Jim Morrison stew of imagery, you might say; thought-provoking but nonsensical and with one thing on his mind.

About 10 years ago when Corinne Bailey Rae was the new rising Brit-soul songwriter, before Amy Winehouse crashed the party, she gave us Till It Happens To You, a dreamy song of lost love remembering how : “we used to stay up all night in the kitchen when our love was new”.

Returning briefly to the Lemonheads, their song, Kitchen, tells of how “It all started in the kitchen” without getting at all specific. 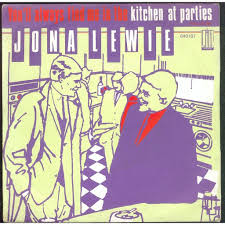 Jona Lewie, post-punk oddity of Stiff Records fame, who has a recurring source of UK income from his Christmas song Stop the Cavalry, also sang  about how you would always find him in the kitchen at parties, which fellow introverts recognise as being a safe zone, away from the expectant hurly burly of the front room with its music and frantic socialising.

Early 90s pop beanpole Martika had a hit with Martika’s Kitchen, another thinly veiled invitation to sample spices and condiments of the human variety. This was written and produced by Prince, in his instantly recognisable 1999-type style.

The strange link between cooking and sex is demonstrated once again by Joni Mitchell in Raised on Robbery, her 1974 hit from the Court and Spark album. This is the story of an unfortunate woman whose husband drank away all their money, leaving her to resort to selling her body.

Tongue sandwich, anyone? Insert your own food-based smutty remark here.