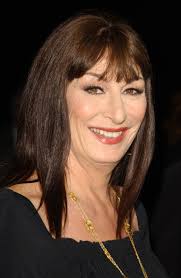 Hollywood is full of beautiful women and the real world is full of women who wish they looked like them I think you’ll agree that’s true. It’s different for men because they can have character roles in movies and then become really big when they get older and looks don’t matter so much.

But for the ladies no one wants to look at a non-stunning girl see I’m not talking about revolting like a witch with a spiky nose and rotten teeth I’m talking about you and me the average women in the street. Sure, we get along okay and there are potential partners out there who think we’re beautiful because they love us but generally speaking it’s easier if you look like Marilyn Monroe.

But once in a while you come across a woman who breaks the rules and manages to get cast in good roles in spite of the fact that when she sees herself in a photograph, she must think, “Why is this funny looking woman always in my pictures?”

I’m writing about this because last night I watched a film in which Anjelica Huston was the only adult female. She had a cameo they call them a brief appearance but since almost every film has to have a woman for people to lust after she must of been it.

Anjelica’s mother was a ballerina and her father was John Huston, a director, and her grandfather was Walter Huston an actor. So I guess showbusiness was in her blood. She started off as a model so obviously somebody thought her looks were unusual but not unattractive and so did Jack Nicholson who she was with for a long time.

She is a kind of role model for girls who aren’t what we would call normal-pretty it’s not having that perfectly proportioned face and body its how you carry yourself and a lot of it is to do with appearing to be happy with yourself. If you’re giving off the kind of feeling that says “Don’t look at me cos your eyes will get dirty” you’re putting a nail in your own coffin. You don’t have to be cocky either mind you or you’ll make a fool of yourself just be confident your all woman and your as good as anyone else okay that’s enough of Kaycee the guru what do I know about it.

So Anjelica has had a decent career with films like The Postman Always Rings twice (with Jack), Prizzi’s Honor and The Grifters and if your wondering the one I mentioned with the cameo was Seraphim Falls with Pierce Brosnan and Liam Neeson. She was Morticia in The Addams Family (extremely sexy I reckon) and she did a couple of Woody Allens.

Two others who have flown the flag for the woman of character are Judi Dench and Barbra Streisand. Somebody once said of Judi “She’s not beautiful but she can play beautiful” by play they mean act and that’s what I was talking about she dresses well holds her head up and gives it some serious dignity. Being the first female M in James Bond she had to be tough and believable in that way but you also got the feeling that Bond quite fancied her and if they did get together for a night he might learn a thing or two.

As for Barbra she’s such a character that if she wanted you to think she was once an Olympic hurdler and Miss World you’d believe her.

It’s a short list because like I said at the start the film world is full of pretty little things no disrespect to them but there is room for other types too not just Nicole Kidman and Michelle Pfeiffer  there’s hope for us all. 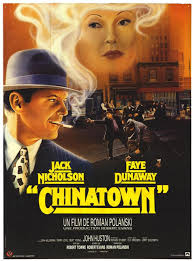 Chinatown is whats known as film noir that’s pronounced nwar its French for black and I think its called that because there is always a dark atmosphere not visual but dark mood you know nothing good ever happens. There was a lot of it around before my time stuff like Humphrey Bogart playing private detectives that get beaten up and stuff.

So Chinatown (made in 1974) was a bit after that but done in the same style and they set it in the old days I’m not sure what decade but old fashioned cars and suits with flappy trousers and everybody wore hats you know. Often in these things the story is just an excuse to see the leading actors (watching Jack Nicholson being cool and Faye Dunaway being sexy) and what actually happens don’t really matter. In this case its about California when there was a water shortage and of course people being killed.

They usually start with a beautiful woman hiring the P.I. to investigate something and it turns out to be not as straightforward as it looks. Sure enough Evelyn Mulwray (Faye) turns up and asks Jake Gittes (Jack) to tail her husband. But later another woman also claiming to be Evelyn turns up and says she’s going to sue him. And the husband is found drowned.

It all gets complicated but if your me you just enjoy Jack and Faye and leave the eggheads to follow the plot. There is stuff about he was found in a fresh water reservoir but he had salt water in his lungs things like that. There’s missing glasses too that are important.

Jake gets his nose slashed with a knife up both nostrils and spends most of the film with a big bandage over it which isn’t a good look but he’s still Jack Nicholson so he’s still attractive.

And there’s lots of peace and quiet in the film which makes a change you don’t want bang crash all the time do you well I don’t it’s all noise these days I suppose that’s why I like old stuff sometimes.

Funny enough I was looking at an old films channel the other day and there was a Bob Hope film where he plays the same  except he’s just pretending to be a private detective cos the real one is in the next office but he’s out of town and Dorothy Lamour gets him involved. That one’s a spoof which means it kind of takes the mickey and Bob was a comedian so he does it real well.

“Was it a legitimate business?”

“Better than legitimate, it was profitable.”

You know how clever those guys were. That was called My Favourite Brunette.

But I’m confusing you now – I’m confused myself but that don’t take much haha. Chinatown has a great atmosphere and some good lines and it has brilliant stars that’s what I like about it. There’s a serious bit when Faye has a girl she calls her sister but it turns out she’s not really I won’t spoil it let’s just say it’s not very nice.

They made a sequel in 1990, still starring Jack and he directed it instead of Roman Polanski who did the original but the same writer Robert Towne he did some great stuff but you don’t usually hear about the screenwriter just the director that’s funny ain’t it no script no film if you ask me but there you go. The sequel wasn’t as good of course they never are are they apart from people say the Godfather series is different but I don’t know you can have too much gangster stuff I reckon.