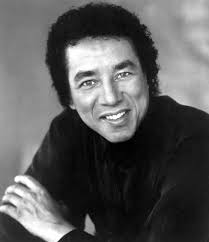 With his high voice, slight build and innocent smile, Smokey Robinson couldn’t be further from the macho image cultivated by many of his contemporaries in the late 60s and early 70s. No Shaft-style bushy moustache and threatening manner for him. He was a vegetarian before it was fashionable (he gave up meat in 1972) and practices transcendental meditation.

The Smokey persona comes through in his songs, too: light, relatively sophisticated  and they suit female singers  as much as men. He often co-wrote songs, sometimes with other members of the Miracles, but there is never any doubt who is at the helm.

Shop Around was a Motown hit in 1960 and although as the title suggests it is about playing the field rather than settling for the first girl who comes along, we are invited to believe the advice came from the singer’s mother.

Of course, you can’t get a perfect picture of a man through the songs he writes, and Smokey was  no angel – he married fellow Miracle Claudette Rogers and they had two children together, but he had extramarital affairs and a son by another woman. But fidelity in the entertainment industry is a difficult thing to achieve. How many men could go through decades of girls throwing themselves at them without weakening? I would suggest it’s more a case of who gets caught and who remains undetected.

Mary Wells was an early recipient of Robinson songs. One of Motown’s first stars, Wells soon left the label, making the mistake of thinking she could do it on her own after a while. But before she went, she found success with Robinson’s You Beat Me To The Punch and the timeless My Guy, smooth and seductive as a milkshake, even when the seduction was already booked by the object of her affections.

My Girl, a major success for The Temptations, did for men what My Guy had done for women and instantly Smokey was a genuine songwriting star.

For his own group, The Miracles, he came up with Ooh Baby Baby, the divine nature of which probably owes as much to his singing as to the song itself. It wouldn’t have amounted to much in the hands of, say, Levi Stubbs of the Four Tops, but with Robinson’s vocals weaving patterns like little white clouds in a blue sky, it was a smash in the US in 1964, although for some reason not in the UK. Not to worry: the digital download age makes it available to us now. And what an addition to a Motown collection it is: he’s treated his girl badly and lost her, but he’s not giving up; he’s not exactly begging, but making it clear that it will never happen again, and for once in pop it sounds genuine. Ella Fitzgerald, Todd Rundgren and Linda Ronstadt are among those who have covered it, and British lovers rock pioneer Janet Kay did a typically cute, bouncy version, but the composer’s original is untouchable. Since I discovered Ooh Baby Baby there have been whole weeks when I couldn’t get it out of my head.

The Miracles, now with Smokey’s name upfront, cemented their place in pop history in 1965 with Tracks of My Tears, and the following year The Temptations grasped with both hands the opportunity to record Get Ready.

Then there was The Hunter Gets Captured By the Game, a sublime recording by The Marvelettes and reworked in 1990 by Grace Jones, with some success but losing the wistful charm of the original. The Marvelettes track is one of Robinson’s masterpieces, that evocative title giving a new twist to the age-old question of who-captures-whom when prospective lovers get together.

Shortly afterwards, Robinson was back on classic territory with I Second That Emotion, The Temptations getting first crack at it and unerringly hitting the spot. The Miracles did it too, it almost goes without saying, and probably the most unlikely cover version was by arty rock group Japan in 1980. Their choosing to do it is testament to the enduring power of the Motown catalogue to inject some magic into an album of almost any genre.

In 1970 Tears Of A Clown emerged like a most welcome throwback to the mid 60s, and again it was adapted by a very different act later on: The Beat gave it the hyperactive TwoTone treatment in 1979/80.

In the early 70s The Supremes were in need of a lift, with Diana Ross well established as a solo performer and Holland Dozier Holland no longer available to supply the raw material. Robinson came to the rescue with Floy Joy and Automatically Sunshine, before the bubble burst.

Smokey himself flew back into the charts in 1981 with Being With You, but, as with the rest of the Motown crew, it’s the immortal 60s stuff we remember.