Regular readers will know that this blog is not about fine food and intricate recipes. It’s about being able to put a decent meal on the table for yourself, your family and your friends. It’s really a branch of the do-it-yourself advice which shows you how to wire a plug, fix a dripping tap or put up some curtain poles. It’s about not being reliant on other people to provide basic services.

With food, though, there is any number of shortcuts, a huge array of ready-made options in the shops, takeaway Chinese and Indian food, pizzas, chip shops, fried chicken places and so on.

So why bother to do it yourself? Three reasons.

They don’t contain hidden quantities of salt, fat or chemical additives that might be tomorrow’s health-scare headlines.

It amazes me that the best customers of the takeaway food joints seem to be low-income families. It astounds me that you see unhealthy-looking physical specimens adding to their woes by the crap they’re eating (and washing it down with sugary fizzy drinks).

It saddens me to hear people almost proudly saying they can’t cook. It makes me wonder what other elementary human skills they have yet to master and in fact have no intention of mastering.

And yet it is they who need the help most, so today we’re going to look at ways to make their life easier.

One thing that even professional chefs will grant the rest of us is permission to use ready-made pastry. That means we’re going to be making pies and suchlike, which are often synonymous with excessive calories and salt, but if it gets someone in the kitchen like a novice with a self-assembly wardrobe because he is clearly not going to be making his own from scratch, then fine.

Similarly, there are jars of pasta sauce, so all you have to do is boil the pasta, heat this stuff and pour it on.

The world is full of curry powder and paste, so all you have to do is supply some cooked meat or defrosted prawns and, again, apply heat, mix and serve – once you’ve mastered the art of boiling some rice, that is.

This is the one that gets my goat, as it happens. What could be easier than throwing a few spices into a pan yourself and creating a taste over which you have some control?

When I lived in Tobago, little sister island of Trinidad, I was writing some features for a tourist magazine and one of the subjects I was given was a local speciality, curry crab (they don’t say “curried”).

There’s a place by a popular beach with a cluster of curry crab cabins, so I went there and found a legendary woman who had been making this for decades, as did her mother before her and so on. I asked her what the main ingredients were. “Well, curry powder,” she began, and I missed the rest of it because I was so disappointed that she was not really doing it herself after all.

Perhaps I was 100 years too late and really needed to have gone there before mass production and ease of distribution made it so easy to be lazy.

It’s a similar story in the Turks and Caicos Islands, a relatively unspoilt group south of the Bahamas. Their speciality? If, like me, you were hoping for something exotic involving their legendary big pink-shelled seafood, conch,  or coconuts or some root vegetable we’ve never heard of, you would have been as dismayed as I was. The national dish is macaroni cheese. And not even home-made, but shop-bought packet garbage. For a special occasion, eating out, many would go for fried chicken.

It is the reverse of the old Crocodile Dundee line, where the veteran bushman is extolling the virtues of eating a certain type of beetle. “You can live on it. But it tastes like sh*t.” In this case it would be, “It tastes great. No nutritional value, but the carbohydrates might just keep you alive.” 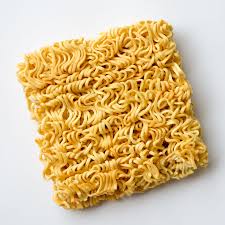 So here, for the benefit of the absolute novice who is almost too lazy to breathe and doesn’t really want to go to the trouble of chewing food, is this week’s recipe. Buy a packet of dried noodles, the type with some “flavor” already in them. Boil some water and soak the noodles in it until they’re soft.

Slurp it down and collapse into your armchair with a bright green soft drink. And good luck to you.