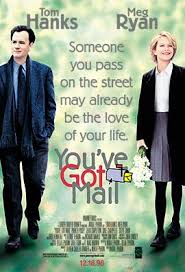 Bloody Hell!!! Excuse my French but I just looked this up and it’s from 1998 that’s amazing isn’t it because that’s a long time ago and it still seems like quite a modern film maybe that’s because the mail in the title is email so we must of been using that back then. Good job too because that’s when the world really started getting electronic and instant none of this messing about with paper and ink and putting things in metal boxes and waiting a couple of days before you could even think about expecting a reply.

So it’s the first 21st century romance film but two years early anyway it’s lovely it stars Meg Ryan when she still looked like Mrs Ryan’s little girl not a blow-up doll  version honestly some people don’t know when their well off I don’t care if she was starting to look a few years older guess what we all are. And Tom Hanks.

She’s a small time businesswoman called Kathleen Kelly who owns a book shop her mother started and she’s got a boyfriend but you can tell its that stage of a relationship when its over really but they just haven’t ended it yet.

Tom is Joe Fox who owns a chain of big book stores and he’s driving the little shops out of business so Kathleen hates people like him. Her shop is aimed mainly at kids which is nice and you get the feeling that no big operation could have the same sort of atmosphere.

And Joe’s rich and the women in his life are the sort of luxurious wastes of space that rich men’s women are always shown as in films I don’t suppose that’s fair really but what do I know about it I’ve never woken up in an ocean-going yacht and had champagne for breakfast. Wouldn’t mind though just to see what its like but I’d have to love the guy to stay with him.

So Kathleen and Joe are both doing the internet dating thing that’s another big step forward for mankind I reckon it’s much better than sitting there feeling sorry for yourself. The world is full of lonely people but when your in that situation you think it’s just you and there must be something wrong with you so you don’t get the kind of opportunities you would if you was happy and full of life. Funny isn’t it that you seem more attractive to people when your already with someone and not really looking I guess its to do with confidence or something.

Kathleen and Joe get along great online they make each other laugh but of course being a romcom you can’t have them just meet up and fall in love and sail off into the sunset there has to be a bit of hit and miss and misunderstandings and stuff first.

So romance was alive and well 18 years ago and it’s still alive now in spite of all the horrible things you read about I’ve met a few guys on dating sites and of course you can’t know all about them from a few messages but its not all nutters out there.

Anyways there is more to this than just the romance there’s the fact that Kathleen’s little book shop her mother’s pride and joy is being sunk by big business but what can you do that’s life ain’t it and you get the feeling she’s not going to lay down and die about it you’ve just got to do something else.