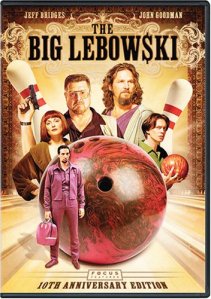 You often see this listed as the best of the Coen Brothers’ films and there is a reason for that it’s bloody brilliant. It’s one of those films and there aren’t that any of them where every scene and every character is like a little diamond it involves a kidnapping like Fargo does another of my faves but this is very different.

Jeff Bridges is in it and he’s a ten pin bowling nut with his friends played by John Goodman and Steve Buscemi. See if you start off with those three and they all signed up for it because they liked the script then you’re onto a winner straightaway.

Jeff’s name is Lebowski but he’s known as The Dude but there is another guy with the same name Lebowski and some gangsters think he’s this rich guy and one of them pees on his rug. That’s a big thing in this story, a rug. Jeff is pissed off about that (sorry) and he goes to see this other one, “the big” Lebowski (David Huddleston) who wants nothing to do with him because Dude is a bum and The Big Lebowski who I will call TBL is a businessman who got rich because he was working while Jeff was out bowling and smoking dope and drinking White Russian cocktails. TBL is in a wheelchair because he lost his legs in the Korean war. So you’ve got this strange relationship plus the gangsters and there’s also the bowling which Jeff and his mates take very seriously.

By the way, Huddleston must have been old when he made this because I remember him as the mayor in Blazing Saddles and he wasn’t young then.

John Goodman’s character is ex army, Vietnam vet and he can’t let it go he treats his life as if he’s still in Vietnam and  everybody’s out to get him. Jeff is supposed to deliver some ransom money and Goodman gets involved and kind of takes over but all his ideas are over the top and likely to make things worse but he’s impossible for Jeff to ignore.

Philip Seymour Hoffman’s in it and he’s brilliant as usual he plays a slightly effeminate personal secretary to TBL and there’s John Turturro as a Latin American bowler called Jesus whose obsessed with beating the Dude and his mates.

And there’s Julianne Moore looking great as TBL’s daughter she’s a weird modern artist and eventually she has it off with Jeff and she stays in bed on her back with her knees up under the covers because she’s trying to get pregnant. There’s all these little touches that really make the film it reminds me a bit of Chinatown you know the Jack Nicholson film only this is less serious but the Coens Ethan and Joel know their stuff and have learned from the stuff they like.

Who gets kidnapped well its TBL’s daughter a tart who calls herself Bunny and she’s good too but the one with a smallish part who really takes the biscuit is Sam Elliott as The Stranger, who turns up a couple of times at the bowling alley he’s from Texas and he’s got one of these moustaches that covers his mouth like a wave breaking over his lips so you can’t see if he’s smiling but you can really because he has really expressive eyes. The Stranger is a real nice guy who likes people to behave properly not in a boring way but you could see yourself making an effort not to be such a cow when he’s around because you want him to like you.

I could watch this over and over again in fact I have I watch all my favourites a lot because it’s like listening to a CD just because you’ve heard it before and you know it inside out don’t mean you won’t enjoy it just as much for the 20th time or whatever.