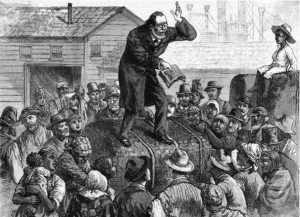 When I first arrived in Suriname, on the Caribbean coast in northern South America and formerly  known as Dutch Guiana, I was taken to a small church by the man from whom we were renting an apartment. They speak Dutch in Suriname and I didn’t (still don’t, although I do try), so the fact that this church conducted its services in English was an attraction.

I was introduced to the pastor as being from England (which is not quite true, but close enough) and felt honoured when he started his sermon by mentioning me. After welcoming me to the city and the church, he promptly conducted what amounted to a character assassination of my country, emphasizing that it wasn’t all it was cracked up to be, and nor was the rest of Europe, not to mention the US.

At the time it just went over my head, because as a middle-aged, middle class white man, I am used to being regarded as privileged and assumed to have money (which is categorically untrue). I accept that I was fortunate to be born in a developed country, to have had loving, hard-working parents and a good education and to have been able to see a bit of the world. I realize that many things I take for granted are, to less fortunate people, huge blessings  that I don’t deserve any more than they do. And so I take a little envy and resentment as part of my lot in life, and try subtly to show such people that I’m not, in fact, an arrogant English pig.

As the months went past, though (and I never went to that church again), the scene was replayed in my mind from time to time. I rationalized it this way: Suriname is a poor country and has always been poor. It still thinks of itself as a victim, this stemming from the days of slavery, and its national hero, Anton de Kom, is the most negative national hero I have ever read about. His autobiography is called “We Slaves of Suriname”, whereas I would have thought a better title would be “Free Men of Suriname” or something similarly upbeat. The Surinamese have been free for a long time; none of them, nor their parents nor grandparents, has ever been a slave. But that attitude remains, and a white man such as I is regarded as a reminder of the bad old days.

I thought the sermon had been caused by that, and this one Brit is not going to convince a whole country that what’s past is past and it should become part of a better future.

It was only recently that I read a booklet given to me on that day. It’s an account of a speech given on Mothering Sunday  1954 by a 20th century American, William Branham, who is regarded by some as a prophet, and in which he talks of the invasion  of the world by the devil.  Branham’s argument was that the world had become an ungodly place, with the sexualisation of women one of his main complaints. This was a decade before the mini skirt, although the emergence of Marily Monroe had given the world a striking sex symbol which may have troubled someone of Branham’s beliefs.

The epicenter of the whole rotten business, he concluded, was Paris, France – and London, England, wasn’t much better. He blamed France for the Second World War, because it was so debauched that God sent the Germans in to teach it a lesson.

As for the US, Hollywood took a lot of the blame for  making people less serious and encouraging them to have fun.

It is not my intention to denounce William Branham, but I must say his views strike me as extreme and I can’t agree with much of what he says.

His heart was in the right place, though. He wanted the world to return to some innocent state he seemed to think existed years ago, but was there ever such a time? And if there was, would we have to give up  all the things we do now in order to get back to it?

Branham advocated getting rid of not just the usual suspects, alcohol and sexual lust, but women working, because that was all part and parcel of the breakdown of moral standards. Women with jobs, money, independence and a mind of their own. He thought a woman’s place was in the home, looking after children.

And the only way to achieve this return to saintliness was “old-fashioned” religion of the kind that terrorized people into behaving themselves, where evil was frightened out of them and they went back, shaking and sobbing, to the straight and narrow.

To get back to my original point, if I had still been in my 11th century Church of England building in Guernsey, I might never have heard such inflammatory views.

You live and learn. One man’s passionate argument is another man’s unhinged ranting. And we all believe in the same God.

The US is far more exposed to what might be called “personality preachers” than Europe is, although we can all watch them on TV nowadays. If an individual believes something strongly, they have every right to express it. And it is up to each of us to decide what we agree with and what we don’t. If fire and brimstone is your bag and I’m a blasé neo-hippy in your eyes, we will just have to agree to disagree.

Let’s just remember we’re all on the same side – there are plenty of non-believers in the world who love to ridicule anyone with faith. Christians need to be united, and find a way to rebuild the church by attracting others, not alienating them.