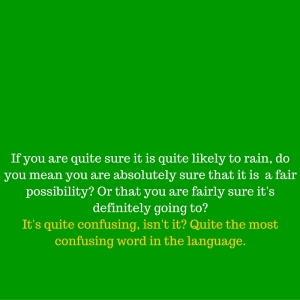 When teaching English to non-native speakers, something that comes up now and then is the need to withhold information for fear of complicating matters. Take quite, for instance.

When we use it nowadays we usually mean a medium degree of something. Quite warm, quite cold, quite loud, quite quiet. It means fairly; it doesn’t mean 100%.

Both meanings are currently in use, so the EFL teacher has to decide which one to teach and which to hide. (Students need to be presented with simple explanations, rights and wrongs, where possible. Only the very advanced ones should be burdened with such brain-twisters.)

If we say the identity of quite is quite complex, we mean it’s somewhere between perhaps 30% and 60% on the complexity scale.

How did this happen? It’s a condundrum, isn’t it? Well, quite. Exactly.

It has to be down to our old villain, ignorance. Someone got it wrong and others heard it, understood what the speaker or writer meant,  didn’t mark it down as incorrect, and started using it incorrectly too.

Now, trend-spotters, a brand new one came the Pedant’s way just this week. It was in a regular weekly football column by a former player and now pundit who broadcasts his views via the BBC. In his “team of the week”, he spoke of a young Manchester City striker and how Pep Guardiola, who will take over as manager at the end of the season, must be looking forward to working with such talented youngsters. But instead of soon-to-arrive manager or perhaps incoming manager, he told us Guardiola was the incumbent manager.

It’s an easy mistake to make. Quite easy? No, very easy. The word incumbent sounds as if it means someone who is heading this way, but it doesn’t mean that. It  means the current manager.

If this word suddenly changes its meaning, it’s quite likely there is only one man to blame.