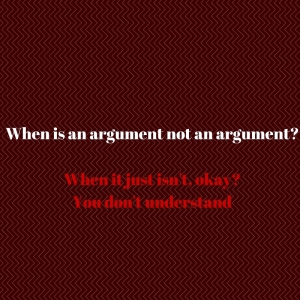 Once upon a time there were three quite big, grown-up words that gave good service to English-speakers. Criticise, attitude and argument were used when necessary by just about everybody and they went about their business without fuss.

But gradually people began to misinterpret them and they gained a bad reputation.

This would sometimes lead to a dispute, which in British English could be called a row or a barney, while Americans might call it a fight (although to a Brit, a fight involves physical aggression, not just words). Anyway, this heated exchange of views became known as an argument, and arguing came to mean a bad thing.

The next of our three well-meaning amigos to gain a bad reputation (and there’s another one in danger: reputation, which tends to mean a bad reputation unless it is accompanied by a positive adjective) was criticize. This has some common ground with argument, because it used to mean to give an analysis of something, which often leads to an opinion and therefore an argument.

When we were asked at school to give a criticism of a book, we weren’t being invited to say it was rubbish (although many of us automatically thought anything on the curriculum was bound to be dire in some way), but to study it and point out how and why things were done.

Soon, though, the negative aspect took over, and to criticize something meant to say uncomplimentary things about it.

This spread rapidly to the noun, critic. A film critic tells us about a movie, and he or she might like it or might not, but when we say someone is a critic, we mean they say bad things.

So that was criticize out the window as regards its previous meaning, but some bright spark threw it a lifeline in the shape of a French noun, critique. This actually meant nothing more or less than criticism, i.e. analysis, but its champions smuggled it into the English language with a more positive  tone. We could give a critique of something and it had none of the negative connotations.

Not only that, though, but they started using it as a verb, so to critique something was to do what criticize used to mean in English anyway. They didn’t reinvent the wheel, they just called it something else. 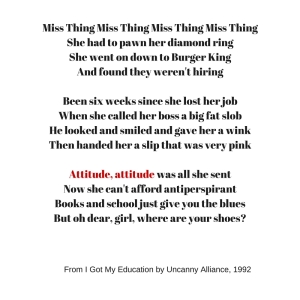 And so to attitude, which became so inextricably linked with negative adjectives (“he’s got a bad attitude”)  that people began to drop the adjectives, and to have an attitude was to have a bad one.

This is people power in action, but not doing things because they have thought them through. It’s the power of a lot of people getting things wrong. It’s a lynch mob.

Ladies and gentlemen of the jury, these three words were framed. They have suffered unwarranted and extremely damaging abuse and they now either languish in linguistic prison or are leading very different lives under a false identity.