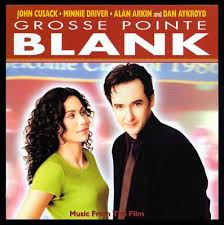 I’m calling this one a classic because in my humble opinion it’s got three great performances in it from John Cusack, Joan Cusack and Minnie Driver no make that five because there’s Alan Arkin and Dan Aykroyd as well. John had a lot to do with making the film not just acting in it but co-writing it with his mates Steve Pink and DV de Vincentis.

You can sort of tell it’s a bunch of mates that came up with it because it’s full of in-jokes and stuff and you have to concentrate and watch it a few times to get everything. Even the title is kind of smartarse it’s because his name is Martin Blank and he comes from a town called Grosse Point and he (John) gets invited to his 10-year high school reunion and he’s not keen to go because he’s a professional assassin and he can’t imagine himself shaking hands with all his old classmates and they say “I’m a dentist” and he says “I killed the president of Paraguay with a fork”. But his secretary thinks he should go cos she’s worried about him he’s not been himself lately she’s his sister really Joan Cusack and she plays the secretary as a bit weird maybe that’s Joan I don’t know.

He’s been seeing a psychiatrist Alan Arkin who also thinks he should go he says “Don’t kill anybody for a couple of days, see how it feels”. All these clever lines flying around but you’ve got to be quick or you’ll miss them.

There is a lot of competition in the professional killer world at the time and  Grocer (Dan Aykroyd) wants to set up a kind of union so they can control prices it’s because it’s just after the Berlin wall comes down and suddenly there are these East German killers flooding the market. Then coincidentally because it’s a film Martin gets a contract to kill someone in Grosse Point so he can do some work and go to the party so he goes there and his ex girlfriend Minnie Driver is a famous DJ on local radio there and he goes to see her and she gets him live on air to embarrass him he dumped her on prom night that’s a big thing in the States where the college kids get dressed up and go to a dance and it’s like their first adult occasion of course they’ve all been drinking and dancing and shagging in private but this is official.

So he asks her to go to the reunion dance with him and you can see she wants to they look like a natural couple both clever and funny and sexy you really could imagine them being together for real I could anyway I’m a romantic me.

It all gets a bit bloody and violent at the dance well downstairs in the school basement anyway there’s not just Grocer in town but this little killer too and their getting in each other’s way Martin and Grocer have this great scene in a deli where their both wary of each other and as well as the proper story lines they throw in funny stuff like arguing with the waitress about what a scrambled egg is. Same with the secretary earlier on she was just on the phone ordering ammunition or something from a dealer and complaining something hadn’t been delivered and next thing she’s talking to her friend about a recipe and she says you chop up carrots and celery to start and her friend thinks that sounds a bit bland and Joan goes ballistic and shouts “It’s just a f***ing base for the soup”.

Some good music too if you like 70s and 80s stuff it was chosen by Joe Strummer the singer from The Clash a bit of reggae or ska I think they call it and a Clash song and other spiky rock punk stuff.

Like I say it takes a bit of following and I even think they could of made a more serious film with the same script but done slower and not so smartarse but it’s great anyway try it you’ll like it.