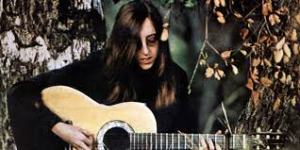 Judee Sill was an American singer-songwriter who had some success in the early 1970s and has become something of a cult figure since her drug-related early death in 1979 at the age of 35.

The first artist signed to David Geffen’s Asylum label, she promptly bit the hand that fed her by spreading the word that Geffen was gay. Although this was true, many people were more reluctant to disclose their homosexuality at that time, and Geffen had been happily in the closet.

Sill herself was openly bisexual and at the height of her fame her house was full of girls with whom she enjoyed herself while treating them with little respect.

Sill’s life was a rollercoaster that roared from heroin addiction and prostitution to stardom and back, as her self-destructive streak ruled out any Joni Mitchell-like career, even though she had talent in abundance.

It was the heyday of the singer-songwriter, with Neil Young and James Taylor leading the way and California awash with talents including Jackson Brown and J. D. Souther. Brown has described her as the best of all her peers, her classically-influenced musicianship elevating her above the brilliant but comparatively homegrown skills of the rest.

She also struck up friendships with Graham Nash and David Crosby, the former being given the task of producing her single Jesus Was a Crossmaker, taken from her self-titled first album.

The biblical reference was one of many in her songs, and suggests a struggle between the spiritual existence to which she clearly aspired and the chaotic, undisciplined reality of her life.

Appearing on the cover of that first album in a priest-like black robe with a large cross dangling, Sill was the Mary Magdalene of her time and her social circle. Just as Jesus’s closest female friend – allegedly a prostitute – aroused disapproval among many who followed him, so Judee Sill’s beautiful, gentle and often playful lyrics were at odds with the way her life played out.

This is the first verse of Crayon Angels

Crayon Angel songs are slightly out of tune
But I’m sure I’m not to blame.
Nothing’s happened but I think it will soon,
So I sit here waiting for God and a train,
To the Astral plane.

And the first verse of Loping along through the Cosmos:

And try this playful one too: The Lamb Ran Away with the Crown