You can’t do that: it’s not natural 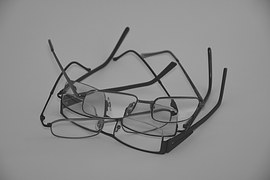 Politicians and TV personalities might be the great pundits of our times, but they don’t have exclusive rights to deep pronouncements. My personal list of potential gurus grew unexpectedly when an optician challenged the opinion of a fellow professional with the words “It’s not what God intended.”

He was talking, ladies and gentlemen, about my contact lens prescription, and I have to say I agree with him up to a point. In order for this story to proceed without alienating anyone, let’s establish some fundamentals. For the benefit of atheists, agnostics and those who believe only in themselves, the remark could equally well have been “It’s not what nature intended.”

I don’t know if this optician really believes in God, but he certainly sounded serious about this. And if he does believe, presumably he has discussed this sort of thing with his maker, such was the authority with which he spoke.

And no, I can’t find any reference to optometry in the Bible, even in general terms. The ten commandments contain nothing remotely similar to ‘Thou shalt not wear glasses with big, bold frames that make thee look like a 1970s cartoon character, nor the sort of lenses that go dark when thou art in the sunshine’. I would have thought that last one would have been in there if anything, because it is a bit like turning day into night, which obviously none of us can do. And shouldn’t do, even if we could. 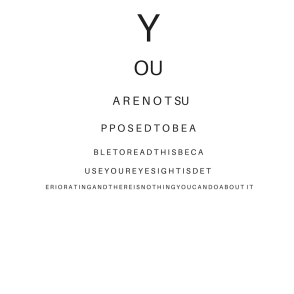 The prescription that gave rise to this whole thing was given to me about 10 years ago by an optician whose whereabouts I will not reveal, because he may be a perfectly nice person but he has a way of making people’s skin crawl. He sounded for all the world like one of Adolf Hitler’s evil doctors when, looking into my eyes, he said slowly and deliberately, “I’m going to make your left eye for reading and your right eye for distance,” as if this would involve pain and permanent mutilation unless I cracked and gave him the secret recipe for the seasoning in Kentucky Fried Chicken. “Don’t insult me with your lies, Tommy. We have photographs of you with Colonel Sanders himself. In the kitchen at his headquarters.” He leaned forward and his voice went softer and higher for the clincher: “Looking at a spice rack.” He adjusted his monocle and ordered one of his subordinates to put on a Susan Boyle CD.

He didn’t, of course. But he did sound creepy and it had been at the back of my mind ever since, until this new optician brought it right out into the open. A chill went down my spine as I realized… Sorry. No it didn’t.

So God, if you believe in him (which I do, incidentally) or nature, didn’t intend an optical professional to treat my eyes individually, only as a pair, both doing the same job? Did God or nature think that varifocal glasses were okay? And what would be the celestial position on correcting squints?

The possibilities are endless. If God had intended us to go on standby he wouldn’t have given us guaranteed seats on planes. Progress and innovation are two of those things that set us apart from the animals. You might be able to teach a dog to perform a simple task, but he’s not going to go away and set up a business passing the skill on to his fellow hounds.

Similarly, thinking outside the box is what distinguishes a genius from the merely excellent. I’m not saying my radical old eye man is a genius, because I doubt whether he came up with the idea himself. But he had the guts to go along with something that he knew his more conservative colleagues would reject.

The human brain is a wonderful thing, and if it can think up ideas to help its own functionality, there really is no limit to human potential. So who’s to say they won’t one day find not just cures for all diseases but ways of preventing these things from ever getting started?

My new optician surely didn’t intend his innocent remark to spark any kind of debate. He just thought he had a better idea. But then he probably thinks God didn’t intend people to write blogs, and that even if He did, He wanted us all to write about politics.